Located in the Balkans, Croatia has become one of Europa’s top tourist destination again since its War of Independence in the late 1990s.

Like much of Europe, Croatia boasts its share of medieval cities and historic ruins, but what makes this country exceptional is its wealth of stunning natural attractions such as the Plitvice Lakes, the spectacular Adriatic coastlines and gorgeous islands.

An overview of the best places to visit in Croatia.

Dubrovnik
Nicknamed the “Pearl of the Adriatic,” the old city of Dubrovnik is one of the prominent places to visit in the Mediterranean.

Located at the southern tip of Croatia off the Adriatic Sea, Dubrovnik was established in the 7th century on maritime trade. With orange rooftop houses sitting in contrast to the blue sky, Dubrovnik presents many sightseeing treasures.

The historic district, the Old Town, is stuffed with many historic features such as the old, defensive walls, cobblestone streets, magnificent palaces and stunning churches.

Just outside the Old Town are popular beaches like Banje and Lapad, while the nearby island of Lokrum offers even more beaches.

Hvar
One of the most popular places to visit in Croatia and in the Adriatic Sea, Hvar is a beautiful Croatian island off the Dalmatian Coast, favored for its landscapes of spectacular beaches, lavender fields and lush vineyards.

The town square is one of Croatia’s largest and most beautiful, surrounded by many historic building like the 17th century Arsenal and the Cathedral of St. Stephen.

The natural beauty of Hvar offers plenty of outdoor recreation, from hiking in the cliffs to swimming in the secluded coves and beaches.

The park’s most notable features are the 16 interconnecting lakes that are divided into upper and lower clusters. Formed by natural travertine dams, the lakes range in distinct colors from turquoise to blue, green and gray. Visitors can explore the lakes and surrounding area by walking along the assortment of wooden walkways as well as by boat.

Situated along the Krka River within Sibinik-Knin County, the national park is best known for its numerous gushing waterfalls and natural pools of clear, blue-green waters.

Zagreb
The capital and largest city of Croatia, Zagreb is a vibrant metropolis packed with both
historic and modern attractions.

Located in northwestern Croatia, the city dates back to the 2nd century AD when a diocese was first established by Hungarian King Ladislaus. Today, Zargreb is a sprawling cosmopolitan city and the heart of Croatian culture, academics and government.

The city is divided into an Upper and Lower Town, with Upper Town being the historic core where tourists can walk down cobblestone streets and visit old, medieval churches and towers.

Pula
Located at the southern tip of the Istria peninsula in the Adriatic Sea, Pula is a popular destination that has been attracting tourists as far back as ancient Roman times when fans flocked the city’s amphitheater to watch gladiator fights.

Having been ruled by various government powers over the centuries, Pula today belongs to Croatia, and is best known for its wealth of Roman ruins and mix of cultures. 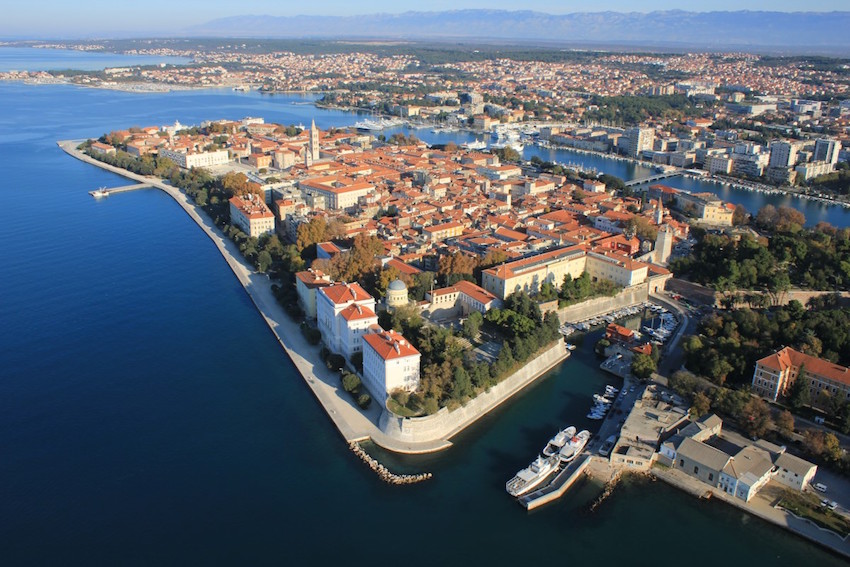 Zadar
A three thousand-year old city situated on a beautiful coastline rich in history is sure to draw tourists. Such a city isZadar, located on Croatia’s northern Dalmatian Coast.

Zadar could be called the ideal tourist getaway because it offers plenty to see and do without all the crowds of other popular destinations in Croatia.

At the heart of the city is its Old Town which offers fantastic sightseeing attractions including Roman ruins, medieval architecture and numerous old churches.

Besides the Old Town, tourists will find a string of beautiful beaches all along Zadar’s coastline where they can sunbathe, swim and relax.

Rovinj
Located on Croatia’s Istrian peninsula in the Adriatic Sea, Rovinj is an archipelago of 20 islands with its Old Town set on a small peninsula. Narrow streets of cobblestone, stairways, arches and other interesting architecture make the Old Town a sightseeing adventure.

Also worth seeing are the scenic harbor, Carrera Street with its many shops and art galleries, and Grisia Street, which is lined with artists and souvenir vendors.

Split
Nicknamed the “Mediterranean Flower,” Croatia’s second-largest city, Split, is located on a peninsula off the Dalmatian Coast.

The city’s main attraction is its historic core of beautiful Gothic and Renaissance architecture of which the Diocletian’s Palace is the crown jewel.

Built between 298 and 305 AD, this Roman Emperor palace complex is more like a small city itself with a maze of marble walkways and buildings containing shops, cafes and bars.

Outside the historic center, tourists will find plenty to see and do including strolling along the seaside promenade, shopping at the lively Green Market and swimming at Bacvice beach.