The best neighbourhoods for families are Saint Germain (central, loads of shops and restaurants), Rue Cler in the 7th Arrondissement (quieter, slower paced, village-like feel, but still close to many attractions and the Eiffel Tower), and the Marais (less touristy, hip and trendy but still family-friendly).

The Westin Paris Vendome – luxury
Paris Westin Vendome with Kids
Very close to the Renaissance (also kid-friendly) but here you exchange the swimming pool for a larger room and suites are larger still. The Westin has kid-friendly service and great restaurants both in the hotel and just out the door. Tuileries metro station is very close. Hotel phone: 33 (1) 4477 1111 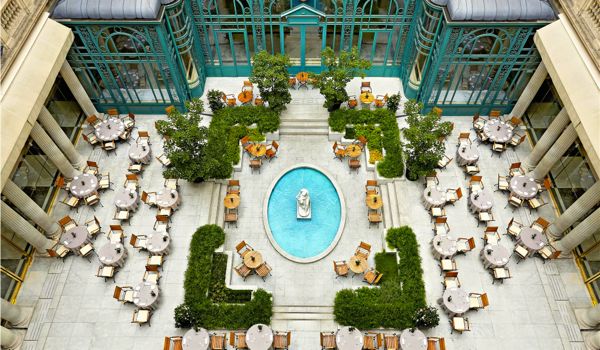 Gardette Park Hotel – moderate
Good hotel for families in Marais
This is a great mid-range hotel and one of my favorites in Paris for families on a budget. The family suites have 2 single beds and a queen and are a good size for Paris. Across the street is a park with a playground and there are several good restaurants within a 3 minute walk. A great neighborhood but with few tourists so you feel like you’re really seeing Paris. Hotel phone: +33 (1) 4700 5793

Holiday Inn Paris Bastille – moderate
Paris Holiday Inn for Kids
King Suites with sofa bed are good for families. Near Gare de Lyon and many cafes and restaurants. The Holiday Inn has larger rooms than most mid-range Paris hotels. Close to 2 different metro lines makes getting anywhere in Paris quick and easy. The entire hotel is non-smoking. Hotel phone: +33 (1) 5302 2000

Staycity Serviced Apartments – budget
Family Apartment in Paris
Large suites with kitchens and cookware close to Gare de l’Est and Gare du Nord (for Eurostar train to London). Friendly staff. Surrounding streets are not the most beautiful in Paris but there are plenty of places to eat, a food market, and good metro connections with the rest of the city. Hotel phone: +33 (1) 4489 6670

The airport is located within portions of several communes, 25 km (16 mi) to the northeast of Paris.

The airport serves as the principal hub for Air France as well as a European hub for Delta Airlines.