It may measure less than 50 square miles/130 square kilometers, but San Francisco justly ranks as one of the greatest cities in the world.

Famous for grand-dame Victorians, classic cable cars, dynamic diversity, a beautiful waterfront, and a soaring crimson bridge, the “City by the Bay” truly has it all.

San Francisco, is a city on the tip of a peninsula surrounded by the Pacific Ocean and San Francisco Bay. It’s known for its hilly landscape, year-round fog, iconic Golden Gate Bridge, cable cars and colorful Victorian houses.

The Financial District’s Transamerica Pyramid is its most distinctive skyscraper. In the bay sits Alcatraz Island, site of the notorious former prison.

1.PIER 39:
From amazing views and a sea of sea lions to chowder bread bowls and California wines, your visit to San Francisco starts at PIER 39. PIER 39—the most visited destination in San Francisco—offers two levels of dining, entertainment, shopping and attractions, all surrounded by unbeatable views of the city and the bay.

Located along the historic San Francisco Waterfront, PIER 39’s location provides the picture perfect backdrop for postcard views of the Golden Gate and Bay Bridges, Alcatraz, Angel Island and the famous City skyline. Be treated to an unforgettable San Francisco experience and discover why a visit to San Francisco starts at The PIER.

PIER 39 is located in San Francisco’s Fisherman’s Wharf, at Beach Street and The Embarcadero. Parking is conveniently available in the PIER 39 Garage located directly across from the Entrance Plaza.

2. Golden Gate Bridge:
Once called “the bridge that couldn’t be built,” today it is one the seven wonders of the modern world. This magnificent bridge, perhaps San Francisco’s most famous landmark, opened in 1937 after a four-year struggle against relentless winds, fog, rocks and treacherous tides. Spanning 1.7 miles from San Francisco to the Marin headlands, the bridge’s sidewalks are open during the day to pedestrians including wheelchair users and bicyclists. 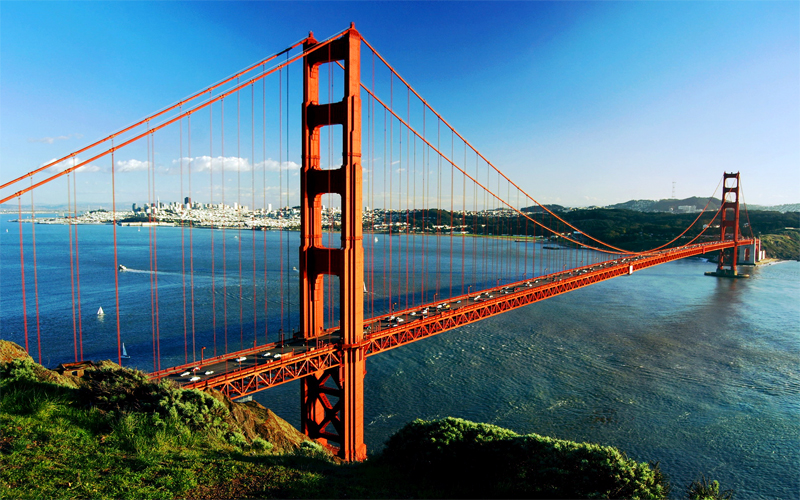 3. Golden Gate Park:
One of the largest urban parks in the world, Golden Gate Park stretches for three miles on the western edge of San Francisco. There’s not a single “Keep Off the Grass” sign and its 1,017 acres are a tonic for mind and body.

Two major museums, splendid gardens and facilities for more than 20 sports confirm that this is a playground in every sense of the word. Among the ever-evolving attractions located in the park are the California Academy of Sciences, the de Young Museum, the San Francisco Botanical Gardens, the Conservatory of Flowers and the Koret Children’s Quarter.

5. Alcatraz Island:
Alcatraz was the site of the first lighthouse in the Western United States but became a federal penitentiary from 1934-1963, housing famous convicts such as Al Capone and George “Machine Gun” Kelly.

Now, this once infamous prison island is part of the Bay Area’s 80,000-acre Golden Gate National Recreation Area. Located one-and-a-half miles from Fisherman’s Wharf, Alcatraz is one of the city’s most popular attractions. A visit to the island includes a tour of the cell house where visitors can see where the prisoners lived.

A four-story living rainforest and awe-inspiring coral reef ecosystem will delight visitors of all ages, while immersive planetarium shows will transport audiences through space and time for a new perspective on our planet.

7. The de Young Museum:
Located in San Francisco’s Golden Gate Park, the de Young showcases American art from the 17th through 21st centuries, modern and contemporary art, photography, international textiles and costumes, and art from Africa, Oceania, and the Americas.

8. SFMOMA:
SFMOMA is currently on the go, presenting dynamic new exhibitions and events around the Bay Area while its building is closed for expansion through early 2016.

The SFMOMA MuseumStore is now open in a temporary location at 51 Yerba Buena Lane, offering the West Coast’s finest selection of modern and contemporary art books, innovative design objects and furnishings, contemporary jewelry and accessories, children’s books and toys, posters and stationery, and an exclusive line of SFMOMA signature products.

9. The Presidio:
Formerly a military post, the Presidio is now a national park site and recreational paradise featuring spectacular vistas, beautiful trails, and historic and architectural treasures. Come for a hike, a walking tour, a picnic, to view an exhibit at the Walt Disney Family Museum, or take a stroll back in time.

11. The Cable Car Museum:
Located in the Washington-Mason powerhouse and carbarn on Nob Hill, the Cable Car Museum overlooks the huge engines and winding wheels that pull the cables for San Francisco’s famous trams. It also features three antique cable cars from the 1870s, photographs, mechanical displays and a fun gift shop.

12. Crissy Field:
This northern waterfront park in the Presidio offers spectacular views of the bay and the Golden Gate Bridge, as well as unparalleled recreational opportunities including BBQs, picnics, and beach sports.
Enjoy long walks along its scenic marshes and catch glimpses of rare birds and native plants. Once housing the first air coast defense station on the west coast, Crissy Field is also home to numerous historical buildings.

13. Asian Art Museum:
This museum is home to one of the most complete collections of Asian art in the world, with a collection spanning cultures from Turkey to India and China to the Philippines through 6,000 years. Through providing rich art experiences, the museum strives to spark connections across cultures and through time, while igniting curiosity, conversation, and creativity.

14. The Exploratorium:
Newly renovated and now open on Pier 15 on the Embarcadero at the heart of the waterfront, the Exploratorium is a home-grown, hands-on museum igniting curiosity and inspiring creativity in people of all ages.

16. Legion of Honor:
Built to commemorate Californian soldiers who died in World War I, the Legion of Honor displays a collection of more than 4,000 years of ancient and European art and houses the Achenbach Foundation for Graphic Arts in a neoclassic building overlooking Lincoln Park and the Golden Gate Bridge.

17. Angel Island State Park:
Often referred to as the “Ellis Island of the West, the Immigration Station originally opened in 1910 and closed in 1940 as the result of a fire. During that time more than one million individuals were processed through the center. Ferry service to the island, the largest in San Francisco Bay, is available from Fisherman’s Wharf.

19. San Francisco Symphony at Davies Symphony Hall:
Founded as an orchestra for the people just five years after the 1906 earthquake, the San Francisco Symphony has offered innovative programs that provide a mix of classical and new music for more than 100 years. With performances over 200 days per year, from Mahler to pops, it’s easy to find a concert you’ll love that fits into your trip.

Their mission is to connect visitors with wildlife, inspire caring for nature and advance conservation action. The Zoo offers a rich history for its guests, including educational programs, keeper talks, fun rides and exciting events for children of all ages

It has flights to points throughout North America and is a major gateway to Europe and Asia.

SFO is the largest airport in the San Francisco Bay Area including all of Northern California and the second busiest in California, after Los Angeles International airport. In 2014, it was the seventh busiest in the U.S.

It is the fifth largest hub for United Airlines and functions as United Airline’s primary transpacific gateway.
It also serves as Virgin America’s principal base of operations.

It is the sole maintenance hub of United Airlines, and houses the Louis A. Turpen Aviation Museum and Library.