Thailand, also known as the Land of Smiles, is a jewel of Southeast Asia. Developed enough to provide most comforts yet still wild enough to offer off-the-beaten path adventure,
Thailand is a country ripe with opportunity for once-in-a-lifetime travel experiences.

Whether you start with the world-class beaches in the south or the mountain villages in the north, Thailand will not disappoint.

Cities like Bangkok and Chiang Mai are bustling hives of activity and commerce, but you haven’t really seen the country until you’ve trekked in the mountains or enjoyed some face-time with elephants or the bold monkeys (who will steal your lunch as soon as look at you).

Thailand’s attractions are diverse and each provides a rewarding and memorable experience in its own way. 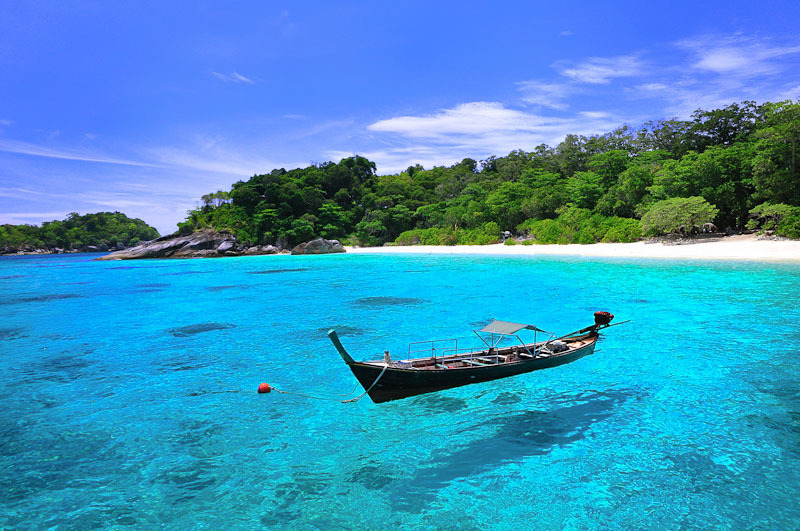 Railay Beach
Krabi province is home to some of Thailand’s most famous beach destinations, and Railay is the cream of the crop.

Widely considered one of the best beaches in the country, Railay delivers on promises of white sand beaches, clear blue water, and a feeling that you’ve found a slice of paradise. You have to take a boat to reach the island getaway, with services available from Krabi town and Ao Nang.

The beaches are the main reason to visit Railay, but it’s also a rock-climbing hotspot. Railay’s karst peaks draw adventurers both experienced and novice to try their hand at climbing the towering limestone cliffs.

Among the many other active things to do, you can go elephant trekking, whitewater rafting, kayaking, and snorkeling, or take on some lighter options such as cooking classes and indulging in a massage.

There’s also the tourist-friendly Diamond Cave, with a convenient walkway to accommodate curious visitors looking to do some exploring between stretches of sunbathing.

Koh Phi Phi
The Phi Phi Islands, also in Krabi, are one of Thailand’s most popular resort areas for a reason.

Only Phi Phi Don is inhabited, with day trips available to the surrounding islands. One of the fun spots on Koh Phi Phi is Monkey Beach, where you’ll come face-to-face, literally, with the namesake creatures.

You can hire a guide to take you out on a small wooden boat or rent your own kayak. There’s also a small stand where you can buy snacks and fruit shakes, but hang onto your treats. If you leave them unguarded, the monkeys will brazenly dig in and chow down right in front of you.

Long Beach is another nice spot on the island; it’s not a secluded place, but is great for watching the sunset. If you’re lucky and the tide is out, it’s a beautiful walk back toward the main part of the island.

Tour operators offer packages for snorkeling and diving trips, as well as excursions to the infamous Maya Bay, where the Leonardo DiCaprio movie The Beach was filmed.

Because Koh Phi Phi draws so many tourists, there are plenty of tour companies arranging tickets to other beach destinations, such as Phuket, Koh Chang, and Koh Lanta. Though you would hardly know to see it now, Phi Phi Don was one of the areas hit hard by the 2004 tsunami.

Guesthouses, restaurants, and markets have been rebuilt and crowds still come in droves to the resort island. There is a small, somber memorial park to honor those who died in the tragedy, yet the resort areas appear otherwise revived.

The Grand Palace, Bangkok
Even if your plans for Thailand mainly involve frolicking on a beach, cozying up to elephants, and eating as much Massaman curry and tom ka gai as humanly possible, you’ll probably spend at least a day or two in Bangkok.

There’s plenty to see and do in the capital, but it’s perhaps best to start with the Grand Palace. This is the number one sightseeing attraction in the city, and it’s staggering in historical significance and craftsmanship.

The grounds are a maze of royal halls, temples, and ancient relics, the most important being Wat Phra Kaeo, Temple of the Emerald Buddha.

A relic within this temple is said to be a piece of bone or hair from the enlightened Buddha himself. Allow several hours to do the Grand Palace justice, but if you’re up for more walking afterward, you can easily take in some of the city’s other major landmarks.

The famous Wat Po and Wat Arun, the Temple of the Dawn (a great place to watch the sunset), are also nearby. And as Bangkok is a main hub for international travel, it’s a great starting point for excursions throughout the country.

Sunday Walking Street, Chiang Mai
Every Thailand visitor looks forward to cheap and delicious food, and it can be found in abundance at Chiang Mai’s Sunday Night Walking Street.

When you’ve satisfied your culinary cravings, you can peruse hundreds of stalls selling an array of unique goods such as all-natural soaps, hand-dyed textiles bearing the unique patterns of local hill tribes, incense and essential oils, musical instruments, paintings, wall hangings, and more.

The market gets crowded every week without fail, no matter what time of year you’re visiting, so brace yourself and try to enjoy being part of the throng.

This is a must-do in Chiang Mai, and is an essential part of the Thailand experience.
If you’re not around for the Sunday market, or just want to get a taste of other market experiences in Chiang Mai, check out the Saturday Night Walking Street or the Night Bazaar on Chang Klan Road, a daily event.

For something less touristy, check out the daytime Warorot Market, near Mae Ping River.

Pai
Thailand’s reputation as a country of beautiful landscapes and friendly people is thanks largely to the world-renowned southern beaches.

Most people don’t realize that the vast north is also home to breathtaking landscapes, though these are of a different nature entirely.

Northern Thailand, particularly the western region near the Burmese border, is marked by mountainous jungle terrain that is both rugged and beautiful.

Pai, in Mae Hong Son province, is a perfect place from which to enjoy the country’s natural beauty as well as the famed Thai hospitality and cooking.

This small town has developed a reputation as a mecca for hippies and backpackers, though you will see locals and families here as well. There is a small nightly walking street market, a variety of local and Western foods, and easy access to nearby temples, waterfalls, and the impressive Pai canyon.

There is an air of cheerfulness and relaxation as you walk through the tiny town center, and it is this vibe that continues to draw crowds season after season.

Khao Yai National Park
Elephants are revered in Thailand, and statues and paintings of them can be seen everywhere you go.

There are many tour groups and elephant camps throughout the country allowing you to spend a day or more with the creatures, trekking through the jungle, bathing them, and even getting to help out with their morning feedings. B

ut perhaps more exciting is the chance to see them in their natural environment, and Khao Yai National Park provides a great opportunity to do just that.

You’ll see elephants roaming near waterfalls, exotic birds of prey, monkeys, and plenty of other tropical creatures that call the park home.

If a one-day stay isn’t enough to take it all in, it’s possible to camp out at the park and get up early enough to watch the sunrise over the lush landscape.

Sukhothai Old City
This is a favorite stop for history buffs and photography enthusiasts, as there are many lovely photo ops in this ancient capital of Thailand.

Ruins of this old city still stand proud despite enduring centuries of battle and exposure to the elements.

Sukhothai’s Old City is a UNESCO World Heritage site, and much has been invested to restore and preserve one of Thailand’s most significant historical sites.

Historic City of Ayutthaya
Ayutthaya presents a glimpse into the glory of ancient Thailand, where visitors can wander the haunting but romantic ruins of the former capital.

After the Sukhothai period, the city was the most important in Thailand, and the old palaces and temples stand as a testament to this.

There are also several foreign settlements, where you can gain a greater understanding of the influence other countries had in Thailand at the time.

Ayutthaya is located only a short bus trip or train ride from Bangkok, making it convenient for a day trip if you’re pressed for time.

If you’re on a more leisurely schedule, plan on spending a few days in the ancient capital and rent a push-bike to tour both the old city and the new.

In a crowd of monks, devout Buddhist followers, and fellow travelers, you’ll have a chance to marvel at intricate religious carvings, observe worship rituals, and gaze out over the ever-growing sprawl of Chiang Mai city.

Just be sure to bring a bottle of water and your walking shoes – the staircase to the temple is steep. At the base of the stairs, vendors hawk everything from tasty local treats to goods handmade by villagers from the surrounding mountains.

There’s also a shop selling masks, elephant carvings, and home furnishings so you can do some shopping while recovering from the trek up and down the stairs.

You can combine your trip to Doi Suthep with excursions to Doi Pui, a small Hmong village in the mountains.

It’s far more touristy than other villages, but if you’re on a tight schedule, this will give you a taste of Hmong culture and a chance to learn more about the hill tribe communities in the region, not to mention purchase some beautiful hand-woven textiles.

The Bhubing Palace, open to tourists, is on the way to Doi Pui from Doi Suthep as well.

Floating Markets
A visit to one of the floating markets is a fun way to do some shopping and eating while supporting local vendors and observing local commerce in action.

Some do seem to cater more to the tourist crowds than to be part of the fabric of local Thais’ daily lives, but there are others that make for a nice authentic travel experience.

You’ll need to get up early to visit a floating market, as vendors are out in their long wooden boats first thing in the morning with their goods, fresh fruits, vegetables, spices, and tasty dishes.

There are several floating markets near Bangkok, Amphawa and Damnoen Saduak being among the most popular. You can go it alone or join a guided tour, which can include visits to local houses and shops.

Phuket International Airport is an airport serving Phuket Province of Thailand.
It is in the north of Phuket Island, 32 kilometres (20 mi) from the centre of Phuket City.
The airport plays a major role in Thailand’s tourism industry, as Phuket Island is a popular resort destination. It is the third busiest airport in Thailand in terms of passengers, after Suvarnabhumi Airport and Don Mueang International Airport in the Bangkok metropolitan area.

The airport is considered to be one of the world’s oldest international airports and Asia’s oldest operating airport. It was officially opened as a Royal Thai Air Force base on 27 March 1914, although it had been in use earlier.

The airport is currently the main hub for Thai Airways International, Bangkok Airways and Orient Thai Airlines. It also serves as regional gateway and connecting point for various foreign carriers.