Skiing is obviously the prime objective of most winter visitors. And with Olympia SkiWorld Innsbruck, a combination of eight ski resorts, who can blame them? But even they will be distracted for a day or two by the other things to do in Innsbruck.

While the shining Golden Roof lures travelers to the Old Town, nearby sites like the Hofburg and Maria-Theresa Strasse keep them there. If you’re traveling with kids, you should enjoy the city vista from the Alpenzoo, the highest zoo in Europe, or the thrilling Bergisel Ski Jump.

The Hofkirche and the Emperor’s Tomb
Innsbruck’s spectacular Court Church, the Hofkirche, was completed in 1563 in the local Late Gothic style. This three-aisled hall-church with its narrow chancel and off-center tower boasts many notable interior features, in particular its 18th-century high altar and side altars, and a choir screen from the 17th century. 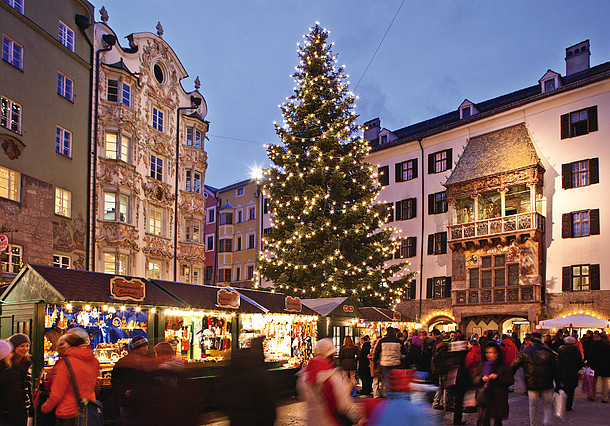 The Golden Roof
The arcaded Herzog-Friedrich-Strasse, lined with handsome old merchants’ houses, enters the Old Town quarter from the south and makes straight for the famous Golden Roof (Goldenes Dachl). This magnificent Late Gothic oriel window, roofed with gilded copper tiles, was built in 1496 to commemorate Maximilian I’s marriage to Bianca Maria Sforza and served as a box from which the court watched civic festivities in the square below (the house behind, the Neuer Hof, was a former ducal palace rebuilt in 1822).

The Hofburg
Innsbruck’s old Court Palace, the Hofburg – a former imperial residence originally built in the 15th and 16th centuries – was remodeled in Baroque and Rococo style in the 18th century upon instructions from Maria Theresa. Best viewed as part of a guided tour (available in English), highlights include its luxurious apartments with their fine painted ceilings.

Old Town Innsbruck
With its narrow house-fronts, handsome doorways, oriel windows, and arcaded-façades, Innsbruck’s Old Town boasts many fine examples of old Tyrolese architecture and southern influences, along with many sumptuous Renaissance, Baroque, and Rococo buildings. The semi-circular quarter of the Old Town, enclosed by a ring of streets known as the Graben (Moat), is now a pedestrian precinct and a wonderful place to pass the time of day.

The Cathedral of St. James
In the Domplatz, Innsbruck Cathedral (Innsbruck Dom) – formerly the Parish Church of St. James – was raised to cathedral status in 1964. Notable for its imposing twin-towered west front and the high dome over the choir, it was built in Baroque style in 1724 and fully restored after WWII.

St. Anne’s Column
Lined with handsome 17th and 18th-century houses and numerous shops, bustling Maria-Theresien Strasse affords a magnificent vista of the mountains to the north. In the middle of this wide old street, directly in front of the Town Hall (Rathaus), stands St. Anne’s Column (Annasäule), erected in 1706 to commemorate the withdrawal three years earlier of Bavarian troops on St. Anne’s Day. Surmounted by a statue of the Virgin Mary, St. Anne stands on the base near St. George, the patron saint of Tyrol, and other saints.

The Hofburg District Christian Allinger
In addition to its imperial Court Palace and Church, the area around the Hofburg offers much else worth seeing. Of particular interest is the Silver Chapel, built in 1587 as the burial chapel of Archduke Ferdinand II and named after a silver image of the Virgin and embossed silver reliefs on the altar.

The River Inn Walking Tour
There’s no better way to spend time than exploring the beautiful riverbanks and esplanades of the River Inn. A great place to begin your walk is the Mariahilf District, noted for its Baroque Mariahilfkirche from 1649 with its wonderful 17th-century frescos, and the beautiful Botanic Garden and observatory. Next, head for the district of Hötting, home to the splendid Old Parish Church (Alte Pfarrkirche) with its tower rising above the new parish church from 1911.

Alpenzoo Innsbruck-Tyrol
Just one kilometer north of Innsbruck’s Old Town center is the 15th-century Schloss Weiherburg, home to Alpenzoo Innsbruck-Tyrol. This beautifully situated zoo is well known for its collection of mountain animals from the world’s Alpine regions – including mammals, birds, and reptiles – and is popular with both experts and tourists alike.

Innsbruck Airport also known as Kranebitten Airport, is the largest international airport in Tyrol in western Austria. It is located approximately 2.5 miles from the centre of Innsbruck.

The airport, which was opened in 1925, handles regional flights around the Alps, as well as seasonal international traffic to further European destinations. During the winter, activity increases significantly, due to the high number of skiers travelling to the region