SALAMANCA MARKET
Set amongst the historic Georgian sandstone buildings of Salamanca Place, this famous market attracts thousands of locals and visitors every Saturday of the year.

Salamanca Market is one of those special places where you actually meet the people who create, make or grow what they sell.

A range of nearly 300 stallholders includes hand-made Tasmanian pieces from woodwork to jewellery, fashion to fanciful glassware and ceramics, not to mention fresh fruit and organic vegetables, all accompanied by buskers and music.

From the market, it’s a short climb up historic Kelly’s Steps to the Georgian cottages and the early maritime village atmosphere of Battery Point. 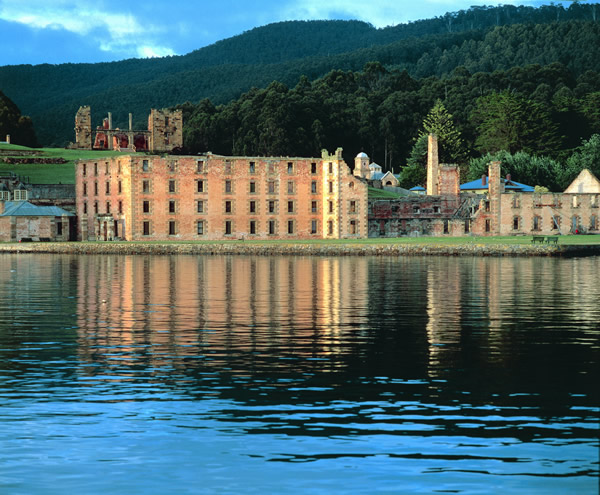 MUSEUM OF OLD AND NEW ART – MONA
The Museum of Old and New Art – Mona is Australia’s largest private museum and arguably one of the most controversial private collections of modern art and antiquities in the world. Described by its owner as a ‘subversive adult Disneyland’, the collection ranges from ancient Egyptian mummies to some of the world’s most infamous and thought-provoking contemporary art.

With around 300 art works on display, the collection takes up three floors within a subterranean architectural masterpiece and is guaranteed to impress.

MOUNT WELLINGTON
Kunanyi/Mount Wellington is a wilderness experience just a 20-minute drive from Hobart and is much loved by locals.

The 21-kilometre drive to the summit passes through temperate rainforest to sub-alpine flora and glacial rock formations, ending in panoramic views of Hobart, Bruny Island, South Arm and the Tasman Peninsula.

No other city in Australia has a vista like this one. The interpretation centre at the top protects you from the blustering winds while an open viewing platform on the western side of the car park looks out to the southern World Heritage Area beyond.

PORT ARTHUR HISTORIC SITE
The Port Arthur Historic Site on the Tasman Peninsula is Australia’s most intact and evocative convict site and one of Australia’s great tourist destinations.

The Site has more than 30 buildings, ruins and restored period homes, dating from the prison’s establishment in 1830 until its closure in 1877. During this time around 12,500 convicts served sentences and for many it was a living hell.

Today, the site sits in 40 hectares of landscaped grounds and you’ll need plenty of time to fully experience all that it has to offer.

Site entry is valid for two consecutive days and includes an Introductory Guided Walking Tour, harbour cruise, access to the museum, access to the Convict Study Centre and Interpretation Gallery and the site of the Dockyard.

CATARACT GORGE RESERVE
Cataract Gorge Reserve, known locally as the Gorge, is a unique natural formation within a two-minute drive of central Launceston – a rare natural phenomenon in any city.

In an easy 15 minutes, you can walk from central Launceston along the banks of the Tamar River into the Gorge and from there follow a pathway originally built in the 1890s along the cliff face looking down onto the South Esk River.

The First Basin on the southern side has a cafe and a swimming pool surrounded by bushland knows to locals as Launceston’s beach.

In contrast, the shady northern side, named the Cliff Grounds, is a Victorian garden created with ferns and exotic plants.

CRADLE MOUNTAIN
Cradle Mountain is part of the Tasmanian Wilderness World Heritage Area and one of the most accessible, interesting and most visited places in Tasmania.

It’s easy to gain a full appreciation of the place on one of the many short walks found in the area.

You can stroll from cascading rivers to dense, old-growth rainforest in just 20 minutes on the Enchanted Walk, walk the two-hour circuit of Dove Lake – one of Australia’s great short walks – or spend the day tackling Cradle Mountain summit itself.

FREYCINET NATIONAL PARK
When you first set eyes on Great Oyster Bay set against the backdrop of Freycinet National Park and the three pink-granite peaks of the Hazards mountain range – you know you’re somewhere different. This is a visual experience to remember.

Situated on Tasmania’s beautiful east coast, Freycinet National Park occupies most of the Freycinet Peninsula – a long strip of land that looks out to the Tasman Sea from the eastern side and back towards the Tasmanian coastline from the west.

The park is loaded with natural assets, including the granite peaks of the Hazards that dominate the Peninsula, abundant birdlife and the iconic and much-photographed Wineglass Bay.

There are long and short walks across the park to secluded bays, clean beaches and bird-filled lagoons, and can be enjoyed by walkers of all abilities.

BLOW HOLE AND TASMAN ARCH
The Blow Hole and Tasman Arch are just two of several unusual geological formations found in the Tasman National Park, a place of rugged beauty and natural diversity with some of the most stunning coastal scenery anywhere in Australia.

Formations like the Tasman Arch, the Blow Hole, the Devils Kitchen, the Tessellated Pavement, Remarkable Cave and Waterfall Bay can all be reached by car, but by far the best views of the rugged coastline are from the park’s many bushwalks.

Not surprisingly, the park offers some of the best coastal walks in the country. A stroll of just an hour or two will reveal sheer drops overlooking chasms and surging ocean, off-shore islands, white sandy beaches and a waterfall that tumbles into the sea. While at the southern end of the park are some of the highest and most spectacular sea cliffs in the world.

ROYAL TASMANIAN BOTANICAL GARDENS
The Royal Tasmanian Botanical Gardens were established in 1818 and are just a short walk from Hobart’s CBD.

They may be small compared to other states but many say they’re the best.

The Gardens hold historic plant collections and a large number of significant trees, many dating back to the nineteenth century as well as the world’s only Subantarctic Plant House. Here, plants from subantarctic islands in high southern latitudes are displayed in a climatically-controlled environment, where chilly fogs and mists mirror the wet, cold conditions of their island homes.

The Gardens also contain some of Tasmania’s most significant built heritage, including the Superintendent’s cottage (now the Administration Office) and the Arthur Wall. This wall, of a design once common in Britain, is hollow and capable of being heated to encourage the growth of fruit trees planted beside it.